Edit
watch 01:36
We're Getting Mutants in the MCU - The Loop
Do you like this video?
Play Sound

The Incredibly Deadly Viper is a snake discovered by Dr Montgomery Montgomery. Its name is a misnomer, because it is not poisonous at all, and maybe the most friendly creature in the animal kingdom.

The Incredibly Deadly Viper is first introduced in The Reptile Room. Monty leads the Baudelaires into his 'reptile room' to show them his latest discovery. With flair, he removes the cover from the cage and introduces the Incredibly Deadly Viper. Immediately after the introduction, the snake uses its tail to unlatch the pen, before latching onto the chin of Sunny Baudalaire.

After initially panicking, the orphans soon realise that Sunny is not scared, and Monty then explains that the Viper is harmless and that he purposely misnamed it to use a similar prank on the Herpetologists.

The snake has a black body with a greenish hue, yellow eyes, and a reddish tongue. It loves to play with Sunny and cares for the children very much. 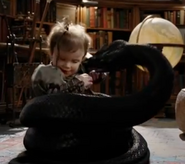 Sunny with the IDV

In The End, the Baudelaires are exposed to the Medusoid Mycelium, and all collapse, choking, on The Island. Klaus assumes he's hallucinating when the Incredibly Deadly Viper appears, with an apple (a hybrid between an apple and horseradish) and gives it to the Baudelaires; saving their lives.

Community content is available under CC-BY-SA unless otherwise noted.
Advertisement